In a remarkably well-fought game, Sky Blue – Integraltech cagers flared their resiliency this season as they conquered the championship match against Red Orange – AFN players, 93-80, in the Supreme Bracket of 7th Consultants’ Cup held at JCSGO Academy Gymnasium, September 14.

A balanced scoring effort has been showcased by both teams in the opening round of the final match in order to get the upper hand but Integraltech predominantly used a strong first quarter to turn back the red orange team and pulled an upset through a 7-0 run in the last two minutes to have a two-point advantage, 20-18.

During the second canto, the sky blue cagers aimed at damaging the fence established by AFN in order to easily list points in the scoreboard but the latter battled back with the intention to exploit and nab the lead — registering a score of 38-36 in favor now of AFN.

Igniting a late charge, the red orange cagers surged ahead in the second half with an early bomb after amassing four consecutive shots and limiting their opponent to score but Integraltech found new life in the middle of the third quarter through maximizing fast breaks and speed in order to counter their foe’s assertiveness and vigor, 64-57.

In the last quarter, the winning team set the tone and extinguished the fire and hopes of AFN in ruling the said championship match by means of countering all the attacks coming from the opponent, marking a 93-80 victorious win. 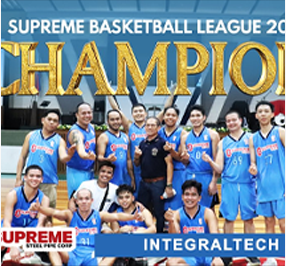