This privacy policy will help you understand how Supreme Steel Pipe Corporation uses and protects the data you provide to us when you visit and use www.supremepipe.com

We reserve the right to change this policy at any given time, of which you will be promptly updated. If you want to make sure that you are up to date with the latest changes, we advise you to frequently visit this page.

What User Data We Collect

When you visit the website, we may collect the following data:

Why We Collect Your Data

We are collecting your data for several reasons:

Safeguarding and Securing the Data

Supreme is committed to securing your data and keeping it confidential. Supreme has done all in its power to prevent data theft, unauthorized access, and disclosure by implementing the latest technologies and software, which help us safeguard all the information we collect online.

Once you agree to allow our website to use cookies, you also agree to use the data it collects regarding your online behaviour (analyze web traffic, web pages you spend the most time on, and websites you visit).

The data we collect by using cookies is used to customize our website to your needs. After we use the data for statistical analysis, the data is completely removed from our systems.

Please note that cookies don't allow us to gain control of your computer in any way. They are strictly used to monitor which pages you find useful and which you do not so that we can provide a better experience for you.
If you want to disable cookies, you can do it by accessing the settings of your internet browser

Links to Other Websites

Restricting the Collection of your Personal Data

At some point, you might wish to restrict the use and collection of your personal data. You can achieve this by doing the following:

When you are filling the forms on the website, make sure to check if there is a box which you can leave unchecked, if you don't want to disclose your personal information.

If you have already agreed to share your information with us, feel free to contact us via email and we will be more than happy to change this for you.

What are the differences between cast iron vs galvanized steel pipes?

Iron and steel are two of the most widely used metals in the world. The two materials have special properties that set them apart from others, and modern technology and processes have developed new subsets — cast iron and galvanized steel. These have a wide range of uses in several industries, households, and sewage systems. This article will describe the differences between cast iron vs galvanized iron, and discuss how these differences affect their usability in pipelines and sewage purposes.

The main component of cast iron comes from iron ores. Then, an alloy made from iron, carbon, and silicon. It is usually made with 2 to 4% of carbon, and smaller portions of silicon. Impurities like manganese, sulfur, and phosphate are sometimes present in cast iron. These additional components are usually too small to affect the properties of cast iron.

Galvanized steel is made of carbon or plain-carbon steel, which are metal alloys. Carbon steel is made from two elements: iron and carbon. Other metals that can be present in this alloy are manganese, silicon, and copper. They usually comprise less than 0.60% of the alloy, which means their effect on the properties of the alloy is negligible.

Cast iron is prepared using a blast furnace and made from iron-carbon alloys or pig iron. During this process, the cast iron is directly formed from the molten metal. The impurities mentioned may be burnt out during this stage. However, carbon can also burn out in the same manner, which should be replaced before the cast iron form is completed. Cast iron would be flawed if it lacked carbon and silicon elements. After the furnace, cast iron does not require refining with hammers and other implements. The result is a less intensive refining process and a cheaper end product.

Galvanized steel is made from carbon steel that has been coated with a protective zinc layer. This is done in a process called galvanization of which there are several different types, such as thermal spraying, hot-dip, electroplating, and more. In hot-dip galvanization, the carbon steel is dipped into hot molten zinc with temperatures up to 460°C. After it is fully coated, it is lifted back up and exposed to the atmosphere. This exposure will make the zinc react to oxygen, creating zinc oxide. Further, it then reacts with the carbon present in the air to form zinc carbonate, which forms a grey layer on the surface of the steel. Though it has been coated in another element, the steel remains to be malleable and easily worked by other metal manufacturing machines.

Cast iron is generally resistant to atmospheric corrosion. They have a higher resistance than some steel alloys. Cast iron is also wear-resistant and can dampen vibrations. However, cast irons are highly susceptible to seawater and are easily corroded and pitted when put under long exposure to high-salt environments. Cast iron can also be more brittle than other processed metals.

Galvanized steel is highly corrosion resistant when compared to most other metals. It has two methods of corrosion reduction, which come from the galvanization process. The molten zinc coats the surface of the carbon steel like pain, and forms a very adherent oxide layer. It also provides a zinc anode to receive the corrosion in place of the steel.

Should the zinc coating be damaged or scratched off, the zinc anode can still protect the surrounding steel. The remaining zinc can also re-form its protective coating of zinc oxide. Similar to aluminum, zinc is highly reactive to oxygen and thus absorbs most of the oxygen it comes into contact with. This prevents the steel beneath the coating from further oxidation. 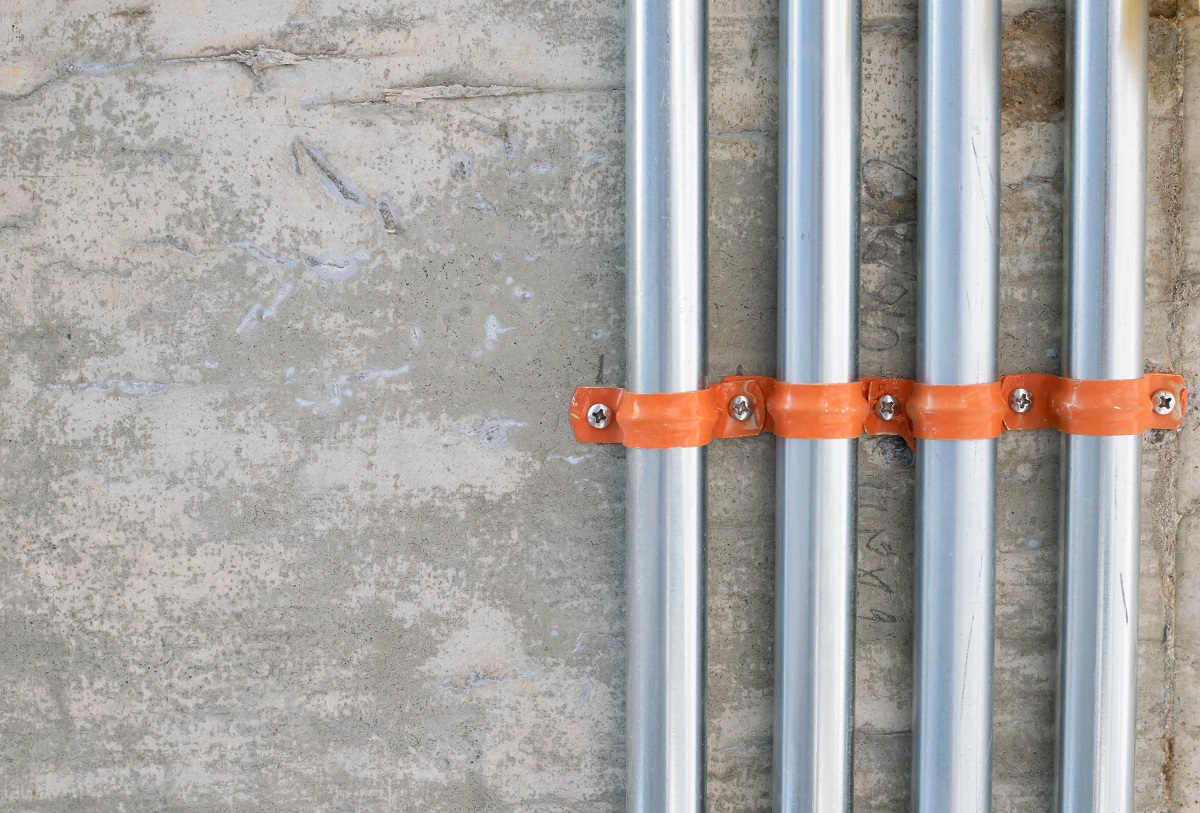 Cast iron is a durable and moderately resistant metal material, making it suitable for a wide variety of purposes. Cast iron can be used to make car gears, components, and pipes for automobiles. It can be used in metal tooling dies and machinery parts for manufacturing. Cast iron is also commonly found in kitchenware as it is good for heating purposes, and the most common form of cast iron cooking equipment is frying pans. However, you can also find cast iron utensils, baking molds, and cooking pans. They are also found in plumbing, though it is not as widely used and generally not recommended for newer homes.

Galvanized steel is favored for its long-lasting use and resistant properties. One prominent example of its use is plumbing pipes. Its protective layer of zinc easily protects it from rust — a form of corrosion. Galvanized steel is also used in steel frames in house construction. It can also be used to make most automobile body parts and cages. This metal can also be found in protective gear and highway signs on the road.

Both of these metals have thicker surfaces compared to other metal types, which contribute to their toughness and wear resistance. Cast iron’s advantage over steel lies in its ability to retain heat for longer periods than most types of steel. This makes it more suited for applications that need strong and consistent temperatures, such as cooking. However, as it is less corrosion resistant and brittle, it is less suitable for applications that expose it to liquids and high pressure, such as plumbing.

In this article, the differences between cast iron vs galvanized steel were discussed. The key differences between the two metals lay in their preparation, and the resulting resistances and metal properties they received from these processes. Due to its corrosion-resistant zinc layer as well as its mechanical properties, galvanized metals are the more suitable material when it comes to making pipes and other plumbing components.